Dresden, Germany, in a nutshell

Dresden, the capital city of the German Federal Free State of Saxony is situated on the banks of the Elbe river. The city was heavily bombed during World War II and many buildings were destroyed by explosions and fire.

During the time (approx. 40 years) when it belonged to East Germany there was not put much effort into the restoration the city’s beauty and infrastructure.
After the wall came down and Germany was reunified in 1989 the German Government invested heavily into Dresden: not only in the economy and infrastructure but also the restoration of the historic downtown on the left bank of the Elbe river.

Today many buildings remind visitors of the good time before the war. The most famous symbol of reconstruction in the city center, the Old City, is the Dresden Frauenkirche (Church), the magnificent baroque dome, which dominates the city center.

When in Dresden your first stop should be the tourism office of Dresden in order to get information, learn about current events, and receive maps and interesting tips.

Juli/August: up to around 30C / 86 F.
Winter: around freezing point

In general year-round, however, most tourists prefer the time between Spring and Fall. Winter months are usually gray and wet.

Dresden, Germany, Visitor Info & Getting Around

Dresden International Airport; however, it is no major airport and mainly relevant for domestic flights or to neighbor countries. Visitors from overseas should consider these major German airports: Frankfurt/Main and Berlin. See websites further below.
From Berlin which is the closest International Airport it is a 3 hr trip either via train or car.

Upper Elbe Regional Transport (VVO) is the regional operator of public transportation and has a informative website, also in English. Go there and find lot of information about fares, the network of bus & trains, and also about getting around by car or bicycle, including addresses.

Dresden, the capital city of the German Federal Free State of Saxony is situated on the banks of the Elbe river. See also the map. 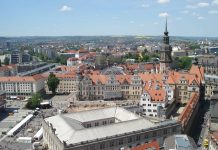 2019-Nov-06
We use cookies to ensure that we give you the best experience on our website. If you continue to use this site we will assume that you are happy with it.Ok